Ahead of the TA session on TradersLive, Eddie Tofpik shared with us his thoughts on what sort of edge TA can bring to companies, and some insights on the markets he follows so closely.

Marie: Hi, everyone, and welcome. Today I’m having a chat with Eddie Tofpik, who’s head of technical analysis and senior market analyst at ADM investor services. He’s also part of the executive committee of the Society of technical analysts in the UK. And thanks for joining me, Eddie, how are you?

Eddie Tofpik: It’s my pleasure to be here. Thank you very much for having me on.

Marie: My pleasure, honestly, I’m so you know, technical analysis will get quite a lot of attention at the upcoming traders live event in June? And how would you define technical analysis for the kind of rookies or newly converted people out there? And I guess, second part of my question would be, you know, what sort of ads do you see for companies who really invest in technical analysis capabilities

Eddie Tofpik: There’s not one approach to looking at markets in a technical analysis way, there are 1000s of different ways of looking at a market. But they all come together in one theory, which is called technical analysis. Now, there’s a giant in the in technical analysis, Andre Murphy, and he basically said and described is the study of market action, primarily through charts with a purpose of forecasting future price trends. Now, there are three types of action market action, there’s price, volume, and open interest, that means positions unsettled. And there are three premises on which technical analysis is but market action discounts everything, we already know that the market has already got. price moves in brands, and history repeats itself, though, I actually prefer Mark Twain’s definition, which is history doesn’t repeat itself. It just rhymes. What sort of edge do you see for companies that invest really in technical analysis? Well, technical analysis is a study of the effect of what’s happened. Look at fundamental analysis, there you’re looking for what’s causing something to happen. Whereas technical analysis, you’re looking specifically at what the effect is. Now, market price, the action we see in prices, leads what’s happening and fundamental re then realise what we’ve realised why the markets move because of the metrics. And that’s where we have the discrepancy that we’re looking at why it’s moved, not what’s caused that move, where is the market moving in which direction but it’s all about timing. And it’s the one thing I’ve learned in technical analysis. Since I’ve been studying it back in the mid 80s. It’s one thing is that time is the most important thing and that above all else timing.

Marie: Now that makes sense. Thanks. Thanks for that and so more specifically, what are the markets that you know you focus on at the moment and what are the movies you see that concern you perhaps or or get your attention

Eddie Tofpik: I did a video today I was specifically concerned with would you believe of all things on excessive indecision in stock markets at the moment specifically the s&p the s&p futures markets emini, s&p futures markets in Chicago, and the knock on effects onto commodity markets. And that’s coming back to the pullback we’ve seen in grains, in oil seeds in crude oil and the products as well in metals. yet, at the same time, we have a split going on, because we’re close to near highs on things such as coffee, and certainly animal proteins as well. So I’m looking to see why there’s indecision in some markets. The effect, we’re seeing in technical analysis on the pullback from big moves up in some of the grains, oil seeds and energy and metals. And then also why we’re seeing still strong markets in things such as coffee, and in some of the animal proteins.

Marie: Okay, well, thanks for these insights. And you’ve been a very loyal and you know, moderators, speaker and for the commodity trading week events that we organise, and we’re very grateful. And I’m curious to know, what do you like about this full week of commodity trading focus?

Eddie Tofpik: Above all else, I learn a lot. I listen and I learned so much at this event. I see how the world of risk management is seemingly changing in its perception, how it’s developing, how we’re getting better at doing risk management, and ultimately the people because you’re seeing people in person originally now virtually eventually one day in person as well. The quality and standards of people speaking and attending is so very, very high. It is professionally run event. Not Don’t say it’s actually a very professional event. You and your team have been fantastic. And I’ll tell you a story, which is this that I’ve attended so many conferences internationally. Throughout my time I’ve spoken internationally many, many conferences at a very high level. And you’ll find I, like many people try to slip off early on last day of the conference, because it’s the afternoon after lunch, you wanna mama? Yeah, what’s he gonna do? This is the one conference I’ve never slept away from. I’ve stayed to the end, because there was been information, education and, and a greater understanding of what’s going on in the world. And it’s be freely given by the best qualified people in the world. It’s fantastic amount of quality that was seen the people were talking. Well, they use this phrase C suite. I think that’s a disused phrase. These are the best quality people in the world, if you want to know what’s going on in commodities, what’s affecting them as a marketplace, what’s actually going on, not just in technical analysis, but all things. And that’s why I think I will never slip away from the end event. Because the very last session on the last day is but be one of the most important is probably for you to know that it’s happened before. And I’ve just sat there and I run out of paper to write notes on. That’s how much it’s called.

Marie: Well, that’s the best compliment Eddie, thanks a lot for such nice words. And we very much look forward to your session on traders live and with Clive Lambert and also Trevor Neil, talking about technical analysis. And that’s going to be a great one. So we really look forward to it. And also to other the, to all the other sessions where you’ll be involved as well. So thanks again for taking the time to speak with me and yeah, looking forward to seeing you very soon. 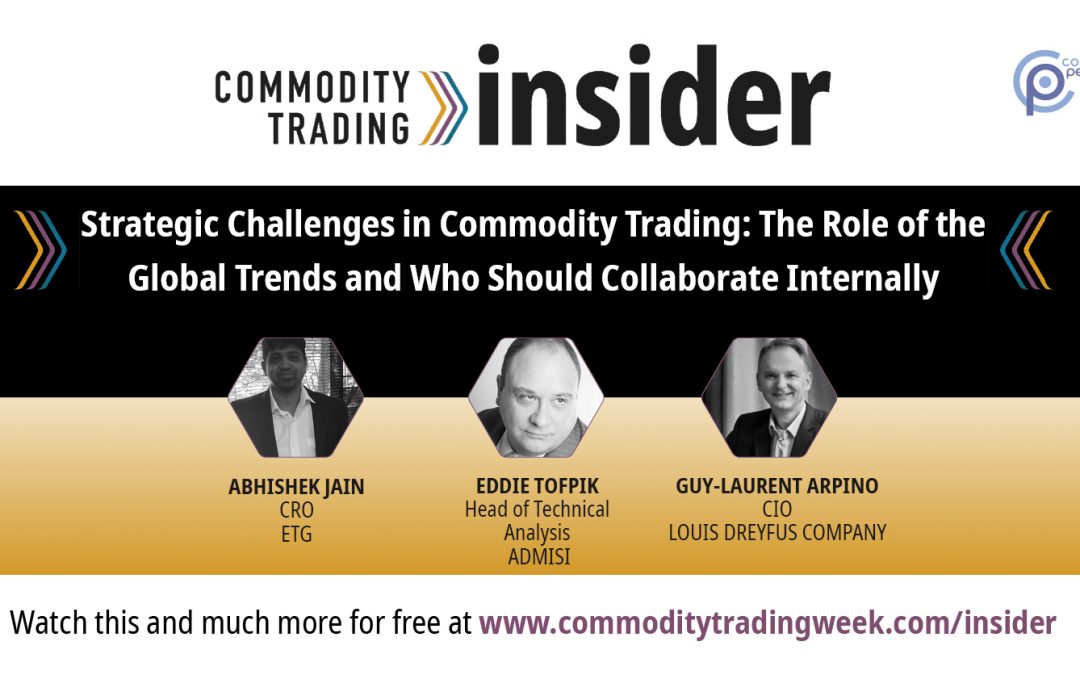 Strategic Challenges In Commodity Trading: The Role Of The Global Trends And Who Should Collaborate Internally

How are the global trends influencing strategic decisions? How do you achieve such a deep transformation from the top to the bottom? Is the pandemic pushing you to change your routes and think more local where possible? What are the large scale projects trading companies are engaging in? What are the mid-term and long-term objectives 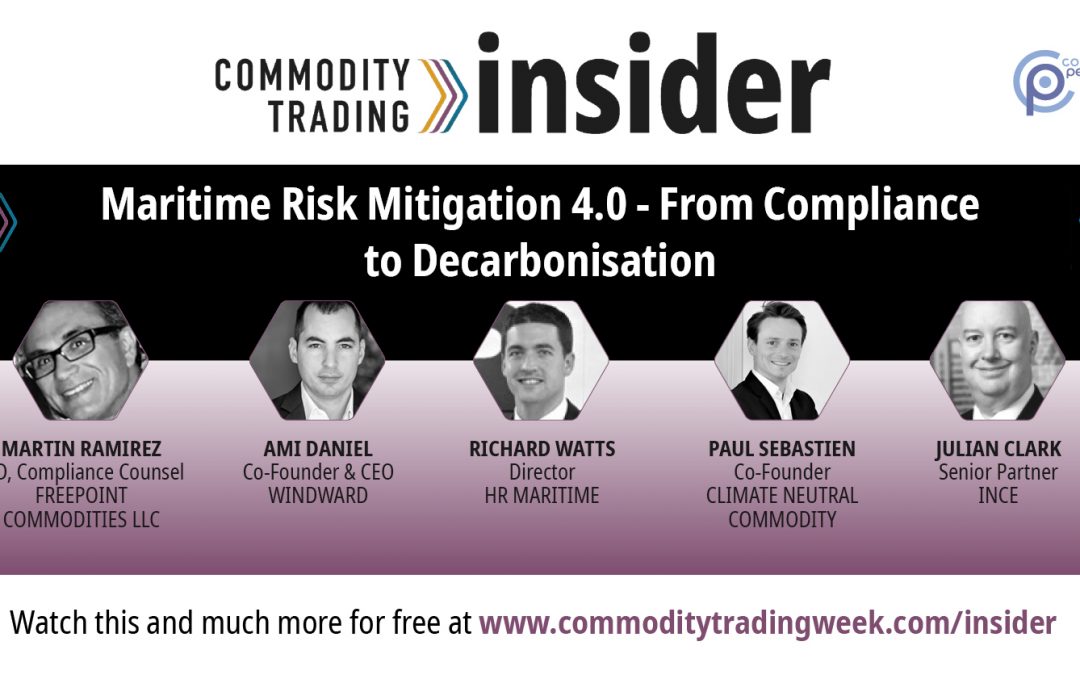 Maritime Risk Mitigation 4.0 – From Compliance to Decarbonisation webinar is bringing together experts to explore the continuously evolving maritime ecosystem, focusing on new regulations and environmental trends.

Strategic Challenges In Commodity Trading: The Role Of The Global Trends And Who Should Collaborate Internally

How are the global trends influencing strategic decisions? How do you achieve such a deep transformation from the top to the bottom? Is the pandemic pushing you to change your routes and think more local where possible? What are the large scale projects trading companies are engaging in? What are the mid-term and long-term objectives 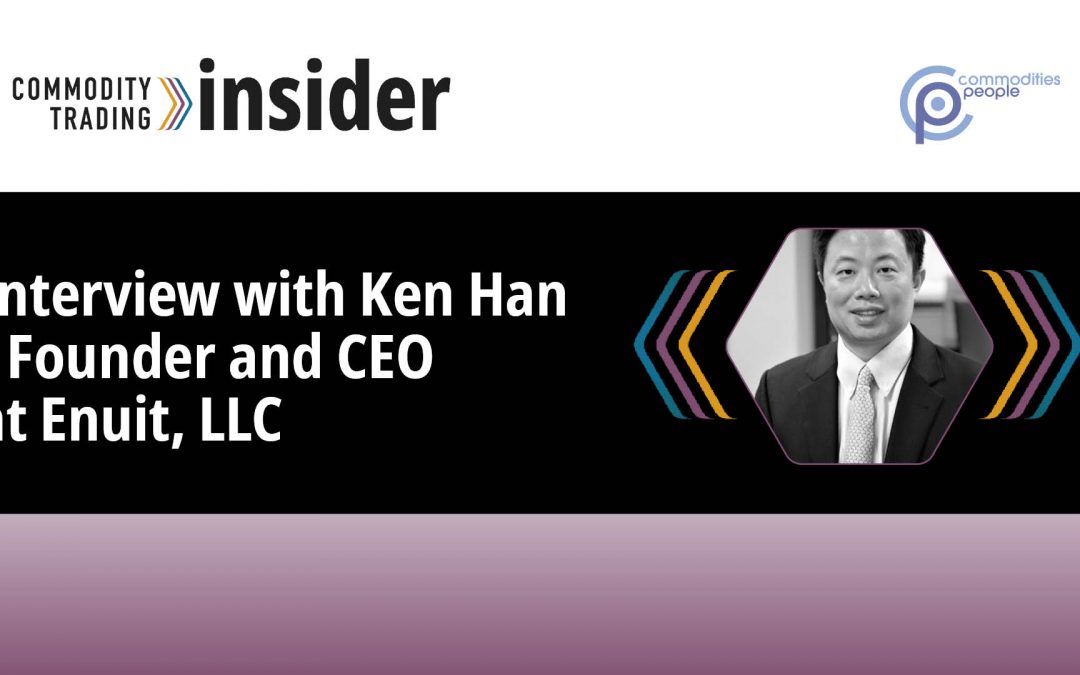 We sat down with Ken Han, CEO at ENUIT, to discuss pandemic-induced push for technology, CTRM future and end users’ requirements.

Ahead of the Commodity Trading Week event, where CP partners up with WISTA, Maryana Yarmolenko Stober took the time to speak to us about women’s representation in the International trade and shipping sector and what will be the drivers to achieve more in that space.

Stay up to Date with the Latest Industry Developments

JOIN US AT CTW

Featuring unique practical conferences focused on risk, digitalisation, logistics, and trading strategies – with interaction and shared learning at the heart of each agenda..

Learn about the latest news in commodity trading and get access to over 100+ premium content in the industry.